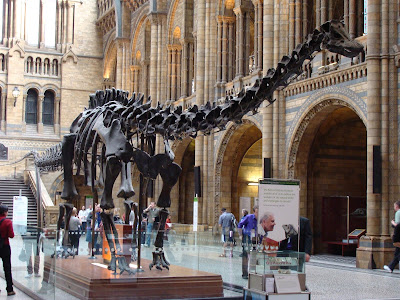 This is Dippy, the deeply loved Diplodocus skeleton from the Natural History Museum in London. Many dragon fans are fascinated by dinosaurs, with some claiming that what we imagine as dinosaurs were really dragons (no really, I have books on it which I'll blog about at a later date). So it seemed fair to celebrate the life of Dippy, who is currently being dismantled and will be replaced by a (still impressive) whale skeleton, with a few interesting facts.

The main reason Dippy is being replaced is that he's not a real boney dinosaur skeleton. He's a plaster cast of a real dinosaur from America. King Edward VII saw a sketch of the real thing, and he liked it so much they made him a copy.

Dippy's been part of the Natural History Museum since 1905, when he was first unveiled. In those days they didn't know much about the Diplodocus, so he was put together with his head and tail touching the ground. In World War Two they hid Dippy in the basement to keep him safe from the bombing.

The way we talk in England, it should be diplo-DO-cus, because of the way we put Greek words together. But since the Diplodocus was an American discovery, scientists have agreed to be nice and pronounce it their way.

Dippy is one of ten replicas of the same dinosaur, which are in museums around the world. Each replica is made up of 292 bones.

See Dippy at a town near you! After being dismantled he is having a rest until 2018, when he will be visiting Dorset, Birmingham, Ulster, Glasgow, Newcastle, Wales, Rochdale and Norwich. After that he's likely to be recast in bronze and displayed outside of the Natural History Museum.

Goodbye Dippy, the museum entrance won't be the same without you!
Posted by David at 18:00