I know he's appeared on a few previous blog photos, but now seems like a good time to finally introduce Dextra! 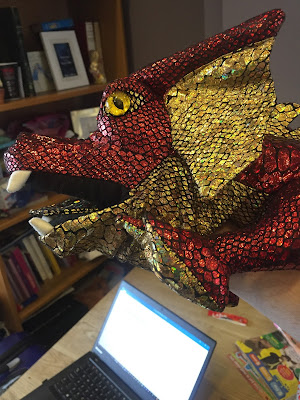 Dextra is a puppet version of a dragon who does appear in Aaron Gray and the Dragon War, but he is not named. He pops up again in later books and hopefully will have more of a starring role.

This particular dragon puppet is available from The Puppet Company and comes in Black, Green or Red.

The actual puppet part (where your hand goes) is just below the mouth, so the rest of its body just sits on your arm.

This means he swings off your arm quite a bit, and I've found it useful to use a rubber band to attach him further down my arm. I'd quite like a brown leather strap instead. 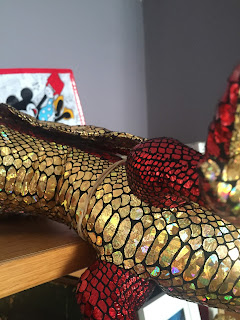 And if you'd prefer something a bit more hefty, there's always this green dragon!

More fan art from Beth! These are so good she may have to be my official illustrator!

This time Beth has drawn one of the Naiads. I don't know where the Naiad's friends are, I hope she's okay on her own as they're typically social creatures! 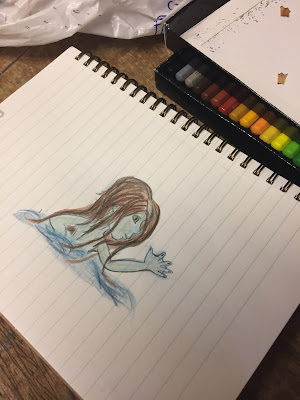 Thank you to Beth again for her amazing art :)
Posted by David at 15:00 No comments:

It was Hilary Hobgoblin's birthday yesterday (mine too incidentally). He's still trying to track down the kids and keythong that he's heard are causing trouble in Breveny. I'm a bit worried as he seems to be headed into the battlezone...

Why not go and see what he's up to at Brevenynews! - And get automatic updates by following him. He's also good at replying to messages. :)
Follow him @Brevenynews
Posted by David at 20:54 No comments:

Charizard is NOT a dragon!

Okay I know he's big, scaly, has wings, flies and breathes fire, but no, really he's not a dragon. Don't forget that Pokemon is an Eastern invention, and Charizard only looks like the Western version of a dragon (I really do need to do a post on the difference between Eastern and Western dragons.)

There's also lots of Pokemony reasons why he's not a dragon. Look at this amazing video by "The Pokemon Master" who can explain things in better detail than me.


Of course I'm still going to pretend he's a dragon when I'm playing as him in Super Smash Bros :)
Posted by David at 15:00 No comments:

This weekend I was allowed to play a small part in the "Stonefest" Atherstone Arts Festival.


Some other Coventry/Nuneaton writers and I had a stall, where we got to tell lots of people about the writers' group and show them what books we had for sale.


I had help (sort of) as well! Dextra the Dragon was on hand to greet people, although he did get a bit annoying at times.


While we were there we also got to see some excellent acts on the entertainment stage. One of my personal favourites were the "Leading Players", a theatre group for people with learning difficulties across Warwickshire.

Oh and all the bollards had been yarn bombed by the Atherstone Yarn Bombers! 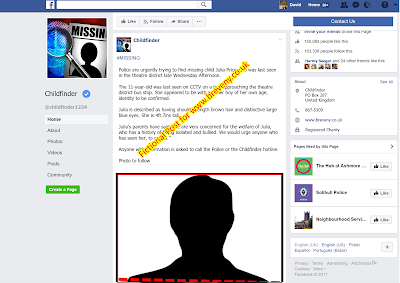 I feel a bit sorry for Julia's parents!
Posted by David at 15:00 No comments:

Appeal: Ban Deliberate Pain as a Form of Child Restraint

I'd like to draw your attention to an appeal by a charity Article 39, who want to stop children being deliberately hurt by escorts when they're being taken from or to secure children's homes.


Last year, the Youth Justice Board revealed in its annual report that the behaviour management system devised for child prisons is now used by its “secure escort contractor” taking children to and from secure children’s homes. This system includes techniques that deliberately inflict pain on children.

I'd encourage you to read the page for more information, but the short version is that although it's illegal to use painful restraints with children within children's homes or secure units, it's not illegal to do so when escorting them in or out of the unit.

An NSPCC survey of restrained children reported that children described being "twisted up, gripped up, ragged up, jumped on and hammered."  Below are some more quotes from that report:

“you feel funny, dizzy, feel like your arm’s breaking, blood goes to your head, your arm stings for about 10 or 20 minutes afterwards, numb and you feel sick with the nose one”

“I’ve had staff here lift me off my feet by my head. You fear for your life here, I’m scared they’re gonna hurt me.”

“Afterwards you have sore arms and wrists, throbbing and can’t move the, like when your arms are dead”.

These are kids who, like Aaron in the book, are already vulnerable. If you can, please donate to this campaign, or spread the word, so that they don't become even more vulnerable in the system that's supposed to protect them.

This Saturday I'll be at the Coventry Writer's Group stall at STONEFEST! 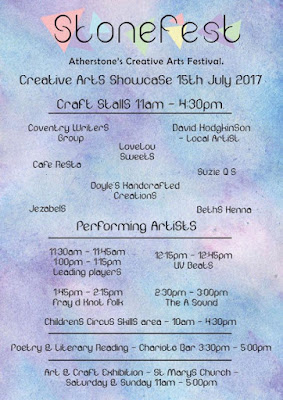 The festival will encompass many aspects of the creative arts spectrum including showcasing musical talent, mixed media arts installations, comedy events, dance shows and theatre events, as well as providing a selection of food and drink from Atherstone based vendors.

Do come and find me. I might even bring along a dragon or two!

Mrs Seeger took a deep breath and opened the meeting room door. This was not going to be an easy meeting. Waiting for them in the room was a middle-aged man with pale blue eyes and the faint outline of stubble around his chin. His hair was well groomed and he was dressed in a sharp blue suit. His immaculate appearance would have been quite intimidating if he hadn’t been slouched in his chair, a childish, sulky look on his face.

“So you still haven’t found my son,” the man said, arms folded. “I’m not happy about this. How did you lose him?”

“We didn’t lose him, Mr Gray. He ran away. Usually, he shows up again after a few hours, but this time…”

“Usually?” Mr Gray interrupted. “So you’re saying he runs away often? And you let him?”

“Well he’s quite a lot older than when you last looked after him,” said Mrs Seeger, mentally kicking herself for matching his petulance. “It’s not always possible to convince him to stay.”

“Well, you should have locked his door.”

“Well you don’t do that, and now my son is missing.” Mr Gray leant forward, glaring at Mrs Seeger.

“I know. We’re doing everything we can to find him. If we hear anything at all, I’ll let you know.”

“You’d better. I’m already talking to my solicitors about you neglecting my child. What made him run away anyway?”

Mrs Seeger paused. She knew the reason but wasn’t sure whether it was appropriate to say. In the end, she didn’t have to. There must have been something in her facial expressions because Mr Gray guessed. He slumped back into the chair and sighed.

“You talked to him about seeing me, didn’t you? Oh, crud.”

“Well yes, but to be honest I don’t think he meant to stay missing for this long. We managed to track him to a bus stop in town, but then he sort of disappeared.”

“Well, the CCTV footage on the bus seems to indicate he just vanished. Obviously, that’s impossible, but we can’t trace him after that point.”

“Sounds like he’s tricked you. Can I see the video?”

“Yes, I’ll arrange it with the police. They have a copy.”

“Great, any other clues?”

“Well, he was talking to a girl on the bus. The police have identified her as Julia Price. You might have seen the appeal for her on the news. They went to school together briefly but as far as we can tell there wasn’t any recent contact."

“Yeah right.” Mr Gray laughed half-heartedly. “He’s got himself a girl and they’ve run off somewhere, he’s pretending it’s all about me and he’s playing you for a mug.”

“It’s possible,” said Mrs Seeger, “but I severely doubt it. That’s not really Aaron’s style and he’s a bit young still for that kind of thing.”

Mr Gray shrugged but made no further comment. The room filled with silence. After a few moments, Mrs Seeger hummed to herself. Perhaps it was because he was on her mind, but Mrs Seeger found herself humming the same tune that she’d heard Aaron humming so many times in the past. To her surprise Mr Gray flinched, suddenly staring at the ceiling. Mrs Seeger stopped humming and Mr Gray regained his composure.

“Mr Gray, will you wait here a moment, please? I have some pictures that Aaron drew that I’d like to show you.”
Posted by David at 15:00 2 comments:


Can we take a moment to appreciate the artwork in this video?

Puff the Magic Dragon is a tear-jerking story about a dragon and his best friend, who then grows up and abandons him. Apparently, there's a secret further verse where Puff makes a new friend, but it's now lost to history.

When the song became popular, some people suggested that the song was actually about taking naughty drugs, but the songwriters have all said this definitely isn't true!

It's  been ages since I've posted any Amazon reviews on here. Here's a lovely review by Margaret

With a rich array of fantastic beasts in every chapter

"An absorbing page turner, with a rich array of fantastic beasts in every chapter. I would rate this book as just the right side of scary for a child reader of 10+. But there is enough humour and pathos for any parent whose child dragoons (or is that dragons?) them into reading it aloud."

Thanks, Margaret. "Just the right side of scary for a child reader of 10+" is pretty much what I was aiming for. And I'm glad you enjoyed the bits of humour that can keep the adults entertained!

Click the image to open the whole notes if you're interested. The document isn't editable but you can copy and paste it and do what you like with it. 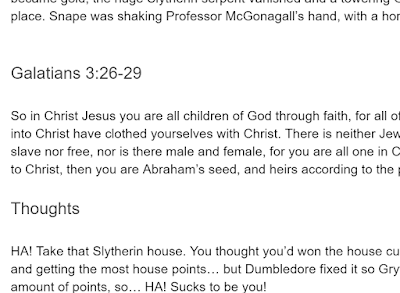 Sharable Link: https://docs.google.com/document/d/1EksZ-0brHhO-3qyDz85xd_PPqg7uV8nlj7J4OjUeGkc/edit?usp=sharing
Posted by David at 15:00 No comments: