Back in January I had fun writing a blog post on the City of London Dragons. Basically I went to London, saw a dragon, and dug as far as I could to see what it was doing there. It was great fun, so in March I did the same thing with The Welsh Dragon, which now contains one of my all-time favourite dragon stories.

Well for the last few months my work has been taking me to the wonderful Norwich, which contains this beauty. 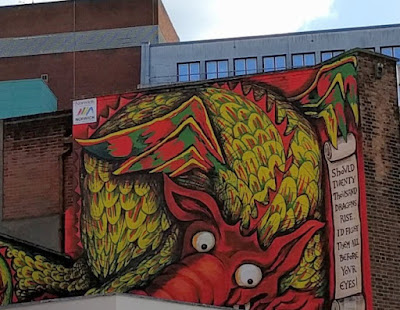 Isn't it beautiful! It's a mural at the top of a building and it would be easy to miss if you're not paying attention.

So what do we know about this dragon, and the quote on the side - "Should twenty thousand dragons rise, I'd fight them all before your eyes."?


This isn't just someone graffitiing a wall (well obviously, it's too spectacular). This work of art was commissioned by Norwich BID and was created by Malca Schotten, a local artist (do check out her website for more beautiful things).


Here's where things get really interesting... a quote on the Norwich Bid website from the artist states:

"The Dragon is inspired on the last Snap Dragon in Norwich – based at Norwich Castle Museum – the words incorporated were also uncovered here at the Castle. I am really happy to see him there, as a bit of fun on the shop fronts! I am a passionate believer in public art and I hope to be working on more murals in the future." - Malca Schotten, Snap the Dragon Mural Artist
So this dragon is inspired by another dragon, which also has a history. Are we really going to go down the rabbit hole and investigate that dragon? Of course we are!

3) Norwich used to be dragon obsessed

I already knew Norwich was my kind of place (their geeky TV and movie shop is amazing!), but it turns out they even have a lot of dragons in their history. This is the castle's Snap, a 300 year old dragon puppet. 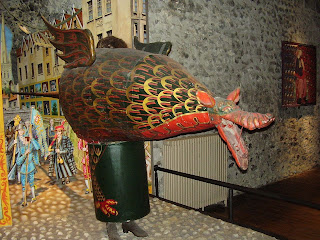 Why did they have a dragon puppet? Well that's a whole other story. So let's dig even deeper and find out!

4) Norwich used to have a "Guild of St George"


The guild of St George was founded in 1385 and was basically a Christian charity offering help to the poor and needy. Every St George's day they would have a procession around the city, and we know at some point in its history this procession developed to include some kind of battle between St George and a dragon. The guild wasn't that important and the procession not particularly notable, until King Henry V gave them a royal charter. After that they were really important and the processions, complete with dragon, became huge.

5) But then it all got a bit political


With great power comes great responsibility (I'm sure I've read that somewhere) and a lot of people weren't happy with the guild's influence on the city. Eventually the guild managed to make a deal with the local council. They became partners, and the big procession was no longer just about St George's day, but also became part of the town's mayor making ceremony.

6) And then the dragon defeats St George!


My grumpiness about the story of St George has already been documented here, so it will come as no surprise that this is my favourite part of the story. In 1558, during the reformation, there was this big thing against feast days and celebrating saints. It was therefore ordered that:

"There shall be neither George nor Margaret but that for pastime the Dragon to come and show himself as in other years.”

Hoorah! Bye bye George (and Margaret whoever you are!) The dragon wins.

7) And then the dragon becomes the people's champion!

Well as the artist said, it was also found in the castle grounds. 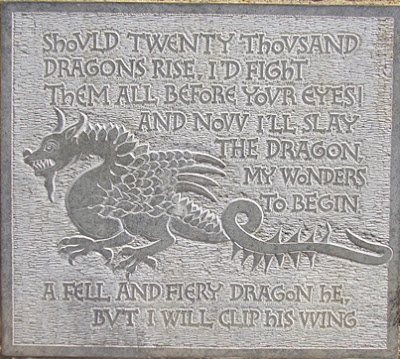