It's another item of fan art from Beth! Look at this cute little creature! 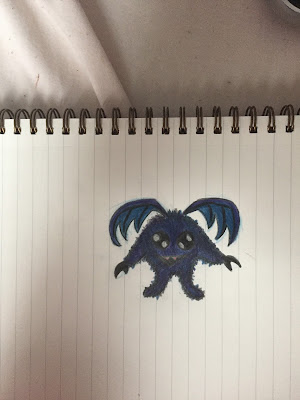 It's a Vampire Sprite, a pesky little creature that hides in the dark and tries to drain you of your blood. Isn't he a sweetheart?!

I'm quite impressed by this one because I don't really describe them in the book (the only times they appear in book one is when it's very dark). But I reckon this is pretty darn close. It's cute. It has humanish characteristics (arms and legs) as well as batlike wings. It has fangs for sucking blood and huge eyes which would explain why they shy away from light.

I asked Beth why she decided on making him furry. She said that mainly it was because I'd described the creatures as "Batlike", but that also she wanted to pay homage to the "Soot Sprites" from "Spirited Away". I really should do a "Spirited Away" blog post at some point as the dragon in that is gorgeous!
Posted by David at 15:00